Any games such as NetHack, Neverwinter Nights, DAoC, World of Warcraft, or any other role-playing or roguelike game can be talked about here.

Do we have any Mud playing HF'ers? And if so, any suggestions?

I've looked at a few but going off the forums, I'm not too sure about em.

You mean those text based RPGs?
Do not meddle in the affairs of dragons for you are crunchy and taste good with ketchup.
Top

Yeah, I've played a few in the past but its been a while. I've noticed a bunch of them now have a fee, or have crap you have to pay real money to get.

i started playing this on aol in 95. but fees where to expensive.

then aol sold it another company and the fees where much better. and i played again for about a year. i stopped playing because i wasn't very good at scripts. and the elite where awesome with them. oftent with scripts so leet they could do there home work while there char farmed, and xped for them, while i would go blind reading text and typing commands.

ive heard gemstone III is decnet too. but i never tried it.

I'm looking at Distant Lands, it's free, meaning totally free not the no charge to play but if you want all the best goodies you need to "donate" kind of free. The forum is either heavily editted or the players are actually happy in the game. Alot of the top 20 muds have tons of bitching and moaning and complaining about DM abuse, wonder how they get to be a top 20?

such as Legend of the Red Dragon? That game was fucking great.

Timmy, ifyou are a Dragonlance fan, you should check out Arctic MUD. It is a more serious MUD, meaning PK is allowed (although it is not overly frequent), and the GODS have a policy of not interefering with the mortals (under normal play conditions). It is not a very newb-friendly MUD, as it is intended for more experienced, serious MUDders. Thus, you are expected to explore and find stuff on your own, rather than shouting to the entire world asking for help.

It usually has 80-100 people on during the evenings, and has been around for a long time. It is completely free.

If you wan to play there, let me know and I'll jump in wih you. I have played there on a few different occasions, but highest I ever go was level 18 (out of 30), mainly because I was solo.

Suck. wrote:such as Legend of the Red Dragon? That game was fucking great.


Ya! I was hooked on that game. Used to play every day before school.
Do not meddle in the affairs of dragons for you are crunchy and taste good with ketchup.
Top

I found a decent active LORD server a while ago that I played on for a bit. It's got 3 games going at once. One is straight up LORD, the second is LORD + a couple of add-ons, and the third has a whole bunch of extras. The second two get sorta' dumb, b/c it's not too hard to figure out how to work the addons and get tons of shit fast, especially the third. You can beat the Red Dragon in a couple of days on it, and it comes down to who puts in the most time to beat it 9 times or whatever before the game resets. The first is a pretty solid game though.

You can just go to Start -> Run: "telnet lord.stabs.org"

OMG ! that brings back memories. I haven't played this game since I was 13. I think I'm gonna cry

Do not meddle in the affairs of dragons for you are crunchy and taste good with ketchup.
Top

My first game was Thexder on a Tandy. I wasn't into computers back then... Primarily because my mother thought they were made of glass.

My older brother was big into Amiga so I played a few games on his system, but I don't recall any of them.

My friend has some big ass tires on his truck, he's like ur typical Texas Redneck, but he has some "Micky Thompsons" (i think thats what their called) and those tires are fkn huge.

I went MUDDING with him one time and jackass tried to go up this super steep hill and he rolled the fkn truck backword, it flopped upside down and then rolled sideways and landed right side up, he broke some rods or some shit and was fucked. Muddding is like a hill billy texas thing, yeee haww lez go mudding. Anyways

You can download sounds and images for the MUD, so it might be best to head to their website first. www.3k.org. The jist of the realm is somewhat a strange one, but its pretty popular. They have usually over 100 people (max of 300) on at all times. The MUD is so large though, that you can usually hunt and not run into many people. They have registered PK, so you dont have to worry, unless you want to. They have 3 sub realms: Fantasy, Science, and Chaos. You will encounter different types of things in each. They are not shy about pulling locations from "real life". IE, you will see things from Disney characters to movies, to books. They have quite a few guilds from the generic to guilds like Fremen (Dune), Jedi, Warders (Wheel of Time books). This MUD is at least 10 years old and I think approaching 15 years.

. I'll post pics after I get my suspension lift upgraded and get the new rubbers on.
Do not meddle in the affairs of dragons for you are crunchy and taste good with ketchup.
Top

. I'll post pics after I get my suspension lift upgraded and get the new rubbers on.

That will look good with some 20 twin twins or some Dubs. Did you get the whistle tips also? Be sure to get some truck nuts!

. I'll post pics after I get my suspension lift upgraded and get the new rubbers on.

That will look good with some 20 twin twins or some Dubs. Did you get the whistle tips also? Be sure to get some truck nuts!

I don't know what any of that stuff is except for the truck nuts. First time I saw them swing'n from this beat up old van on the backroads of Alabama I about pee'd my pants laughing.
Do not meddle in the affairs of dragons for you are crunchy and taste good with ketchup.
Top

Bah... I've given up already, I forgot what it was that drove me away from MUDs to begin with. Not overpowered classes, or silly themes (like smurf village), or the lack of graphics. Nope what drives me nuts is inconsistent map making, if I move 1 step north, 1 step west, 1 step south, and one step east I should fucking be back where I started......

your making the mistake of thinking your moving the same distance evertime you change rooms. some rooms say there is a road up north that curves off down the hill, etc, etc. so if you went north, you could end up in a room thats like 50 yards away from where you where.. take 3 more rights at different distances and you wouldn't be at the same place =P.

this is town square for the game i played. 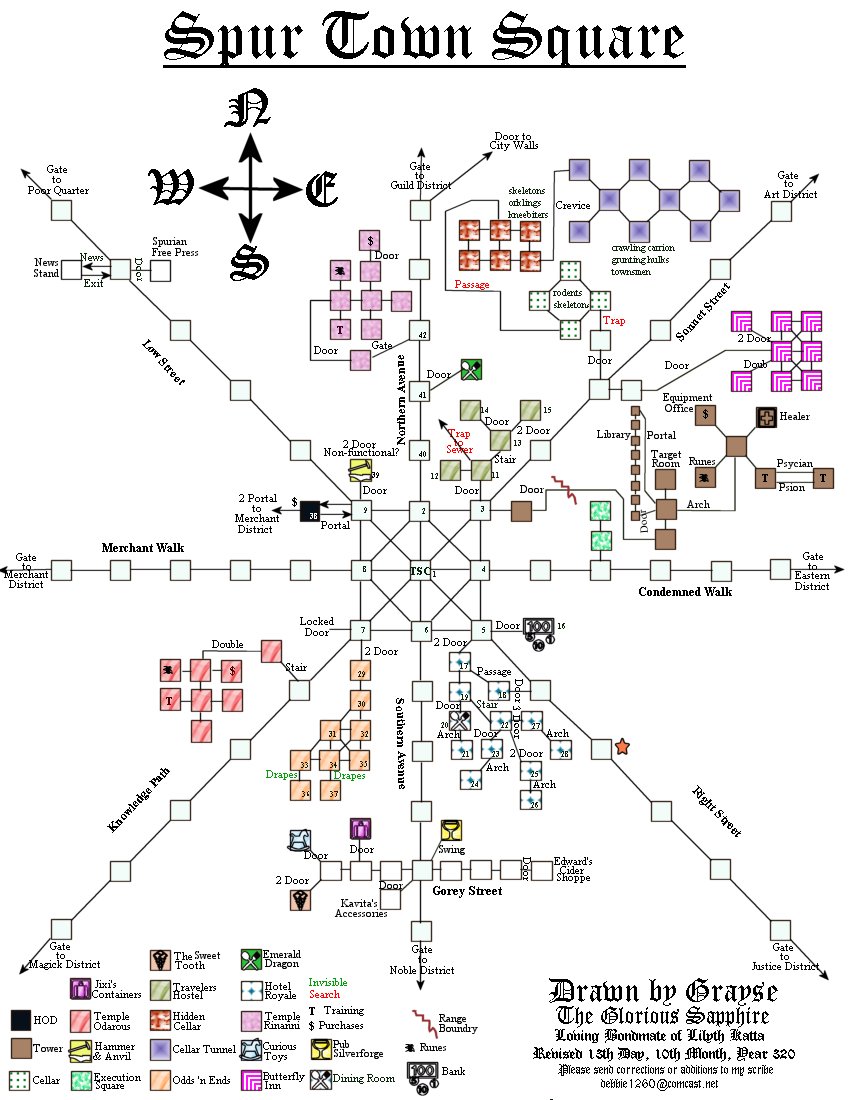 at night time you can't see shit as a human unless you had a torch equiped. blind i used to be able to go from the bank to all the stores or to the gates to go xping =P

I understand the logic, but I still think it's just laziness on the programmers part. Since the actual action of movement costs the same move points whether that one step was 10 feet or a quarter mile and the "room" description doesn't inform how far you came from the last "room". I miss the old Bards Tale/SSI Gold box Ad&D games, plenty of mapping fun to be had there.